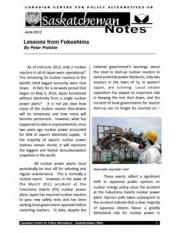 As of mid-June 2012, only 2 nuclear reactors in all of Japan were operational. The remaining 52 nuclear reactors in the world’s third largest economy were shut down. In fact, for a six week period that began on May 5, 2012, Japan functioned without electricity from a single nuclear power plant. What has happened to date is unprecedented, since two years ago nuclear power accounted for 30% of Japan’s electricity supply. If the majority of Japan’s nuclear power stations remain closed, it will represent the biggest and fastest denuclearization anywhere in the world."

In this special Saskatchewan Notes, Peter Prebble brings his considerable insight to the lessons that can be learned from the Fukushima disaster in Japan. Surveying the consequences of the disaster, Peter weighs in on the future of nuclear power and the opportunities for sustainable energy in the wake of Fukushima for Canada and the world.