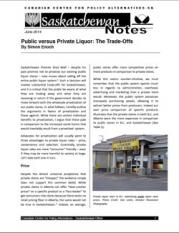 Saskatchewan Premier Brad Wall – despite his past promise not to privatize our existing public liquor stores – now muses about selling off the entire public liquor system. Such a decision will involve substantial trade-offs for Saskatchewan, and it is critical that the public be aware of what they are trading away and what they are receiving in return if the government decides to move forward with the wholesale privatization of our public stores.

Through privatization, the Saskatchewan people will receive greater convenience in exchange for greater social harms. If we believe that ease of access to alcohol for the individual consumer should be the number one priority of liquor regulation, then privatization is the way to go. If we believe that there is a greater public interest in regulating alcohol to maximize social welfare and public health, then we must remain committed to our public liquor stores.