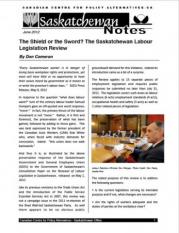 SaskNotes: The Shield or the Sword? The Saskatchewan Labour Legislation Review

The Saskatchewan government's recent release of their Consultation Paper on the Renewal of Labour Legislation has raised many legal questions regarding the constitutionality of the government's proposed changes. Dan Cameron reviews the government's position and asks whether the consultations may actually serve as an opportunity for the provincial labour movement to expand the process of collective bargaining.

Dan Cameron was the former Director of Employee Relations with the Sask. Public Service Commission and served as chief Government spokesperson in public service negotiations. He has served as a sessional lecturer in industrial relations in the Hill School of Business, University Of Regina.