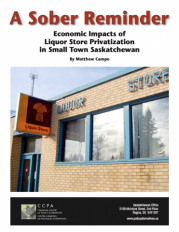 In 2014, the Saskatchewan government privatized four rural SLGA liquor stores in Langenburg, Ituna, Kerrobert and Ponteix. In light of the government’s plan to privatize another 40 SLGA stores throughout the province, it is critical to evaluate the economic impact of privatization on the four rural towns that have already experienced it.

A Sober Reminder: Economic Impacts of Liquor Store Privatization in Small Town Saskatchewan by economist Matthew Campo identifies direct and indirect job losses, reduction of labour income and the potential for diminished municipal tax revenue in each of the four communities that experienced privatization.

As custodian of the overall economy, governments must take into account all the potential economic impacts that may result from a proposed policy. It does not appear the current government has done this in regards to liquor privatization. The potential loss to government tax revenues have not been discussed or included in previous literature. Similarly, there appears to be no assessment of the net economic effect on the province as a whole.

As this limited analysis of four communities makes clear, the economic impacts of privatization extend far beyond the physical store. Although there may be short-term benefits from government ridding itself of operating costs, in the long-term this may result in the loss of well-paying jobs and labour income.