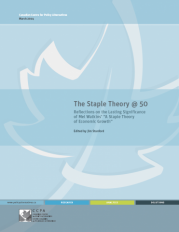 Renowned Canadian political economist and long-time CCPA research associate Mel Watkins passed away on April 2, 2020. To remember Mel and celebrate his work, the CCPA is re-releasing The Staple Theory @50, originally published in March 2014, with the following new introduction by Jim Stanford.

One of Mel Watkins’s most lasting and influential works was an article he published in 1963, “A Staple Theory of Economic Growth,” in the Canadian Journal of Economics and Political Science. The article extended and updated earlier theoretical and empirical work by economic historian Harold Innis, who first described the successive waves of staples industries that shaped Canada’s economic development, political economy, and social geography. Watkins took Innis’s core idea, modernized it, and applied it to understanding the peculiarly unbalanced nature of Canada’s postwar growth and development.

For example, Watkins used this updated model to help explain Canada’s extreme reliance on foreign investment, the stunted nature of the domestic business class (concentrated in the finance and resource sectors), and the economic and geopolitical risks of that whole mode. This important article, and Watkins’s other work at that time, thus formed a crucial link between the earlier staples scholarship of Innis and his contemporaries (like W.A. Mackintosh), and the emergence of an entire new school of radical Canadian political economy. It also laid the intellectual foundation for so many subsequent theoretical and policy interventions during the tumultuous 1960s and 1970s, including Watkins’s own work on the Task Force on Foreign Ownership and the Structure of Canadian Investment (which reported in 1968).

A generation or two later, this work again demonstrated its lasting significance. Beginning early in the 2000s, Canada’s economic and political trajectory came to be dominated by an unprecedented resource extraction and export boom focused on the petroleum industry, and on bitumen mining in northern Alberta, in particular. The negative side-effects of this boom quickly became obvious, including a destructive overappreciation of the Canadian dollar, negative spillovers on other export industries (like manufacturing), undue political influence of fossil fuel industries, tighter geopolitical integration into the U.S. orbit and, of course, horrible implications for Canada’s performance in greenhouse gas emissions.

I gave a presentation to energy workers in early 2013 about the risks even they faced as a result of this overheated, out-of-control staples boom. When I cited Watkins’s 1963 article in describing the origins of staples theory, it struck me suddenly that 50 years had passed since its first publication. The anniversary seemed like something to be noted and celebrated—all the more so given Canada’s structural regression into renewed staples dependence.

So, with input from 20 of Watkins’s legion of former students, colleagues and co-conspirators, we assembled a collection of short essays reviewing the legacy and continuing importance of that article. Initially published on the Progressive Economics Forum website, the collection was subsequently published by the CCPA as The Staple Theory @ 50: Reflections on the Lasting Significance of Mel Watkins’ “A Staple Theory of Economic Growth".

We invited Mel himself to contribute a rejoinder to the collection that might reflect on its varied contributions. Showing his typical modesty, he was initially reluctant to do so. But we talked him into it. And his eventual contribution was also typically self-critical. He argued that his own previous work had not been sufficiently cognizant of many of the now-recognized concerns of progressive political economy, including a critique of Canadian colonization and environmental concerns.

Mel rightly cautioned his acolytes (myself included) from re-applying his 1960s model mechanistically to the current circumstances—including particularly his proposals for strengthening forward and backward linkages to resource extraction—without adequately addressing new challenges, especially climate change. This demonstrated for me his principled and modest spirit of self-criticism, and his determined willingness to continue advancing our shared theory and activism.

Since then, of course, the bitumen boom has predictably gone bust, as did every previous staples boom in Canadian history. Western Canada Select oil is presently selling (at the wellhead) for almost $0. Beaver pelts are worth more than heavy oil. Jason Kenney and his war room partisans pretend they can somehow reverse this state of affairs with social media trolling, faux separatism and cruel austerity. Extracting ourselves from overreliance on petroleum extraction and export will be painful, but it is also inevitable. And it opens many promising economic, regional and environmental opportunities, as well.

I am confident that Canada will traverse that challenge successfully: the political and economic forces leading us away from petroleum dependence are ultimately unstoppable. I am sorry Mel Watkins won’t be around to see it happen. But I am grateful for the inspiration and leadership he gave our progressive economics community, and me personally, to help us get there.

— Jim Stanford, economist and director of the Centre for Future Work, and a CCPA research associate.