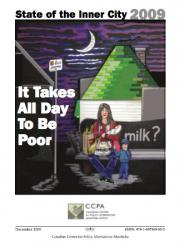 “What most people just don’t get,” she stated, “is that it takes all day to be poor.” Those words, spoken by one of CLOUT’s member representatives, have taken on a life of their own. Its simple, but profound message is that we need to take the time to examine the details of being poor, not just the superficial images that prop up stereotypes. Details force us to wonder if we could handle their situation any better and to recognize the myriad of support we tap into every day to maintain our privileged standard of living, support that most of us take for granted. We needed a way to chronicle those details, and so, “It Take All Day to Be Poor,” the journalling research
project, was born.

The CCPA—MB, in conjunction with CLOUT members, received approval from the University of Winnipeg Research Ethics Committee, and the investigation began. CLOUT organizations took care to ensure that the seven diarists (or co-researchers) in this project were as representational as possible of those living in impoverished situations in Winnipeg. All participants self-identified as living in poverty. All were on some type of financial assistance, with one participant in transition to the work force.