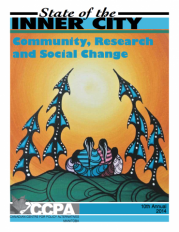 State of the Inner City Report 2014

The State of the Inner City Report is an annual research collaboration between the Canadian Centre for Policy Alternatives Manitoba and community organizations based in the inner city of Winnipeg. This year marks its tenth year anniversary. Since the beginning, the State of the Inner City Reports have celebrated community-based development and advanced progressive policy alternatives put forward by those working and living directly in the community.

The report begins with the paper The State of the Inner City Report: It’s more than a collection of stories, written by one of the founders of the report, Shauna MacKinnon.  This chapter reflects on the inner city during the 1990s, and subsequent government policy changes and investments in the 2000s, including the establishment of many community-based organizations (CBOs). This section of the report highlights why the State of the Inner City Reports began, the impact of community-led development and ongoing challenges.

The second chapter, It Takes a Community to Support a Family by Molly McCracken and Julia Higgins is focused on the role of community-based supports for families and the child welfare system. The Phoenix Sinclair Inquiry, Achieving the Best for All Our Children, released a year ago documents the importance of community-based supports for child and family health and well-being.  This paper highlights the approaches used by CBOs when working with children, youth and families, as well as their continued struggle in collaborating with the child welfare system. The report puts into context the history of colonization and poverty, which have all shaped the growing number of children in care, as well as the continued over representation of Aboriginal children and youth. Through this lens, conclusions and recommendations are drawn.