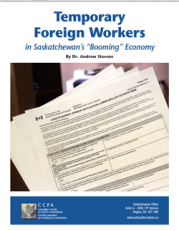 As the Federal government scrambles to enact reforms to the embattled Temporary Foreign Worker Program (TFWP) in the wake of revelations of widespread abuse, the Saskatchewan government has voiced its displeasure with the proposed reforms. Arguing Saskatchewan represents a “unique situation,” Minister Responsible for Immigration Jeremy Harrison claims that there simply are not enough “domestic workers in the province to fill the jobs the economy is generating.” While there has been much heated rhetoric regarding the need for the TFWP in Saskatchewan, actual data on the program in the province has been virtually non-existent. Dr. Andrew Stevens’ Temporary Foreign Workers in Saskatchewan’s “Booming” Economy remedies this glaring lack of concrete evidence in the current debate over the TFWP in Saskatchewan. Dr. Steven's study will prove an invaluable resource for those concerned with the impact of the TFWP on Saskatchewan's labour market.