Home › Publications › Reports & Studies › Is There Value in Value for Money Assessments? Testing the VfM Test in Western Canada 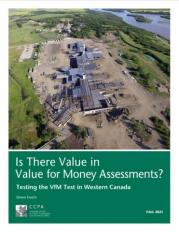 Is There Value in Value for Money Assessments? Testing the VfM Test in Western Canada

For governments that seek to defend the public-private partnership (P3) model and their continued use of it, the “value for money” (VfM) report is often the primary means by which governments seek to lessen public skepticism and justify their decision in opting for a P3.

In Saskatchewan, “value for money” is often held up as the determining factor in government decisions to pursue a P3. Speaking in defence of the decision to use the P3 model for the Regina Bypass, Minister for SaskBuilds Gord Wyant pointed to the value for money report as evidence, stating “the report confirms what our government has said many times — that a P3 was the right decision for this project.”

Given the importance of the VfM to decisions on whether to pursue a P3 or a traditional public build, it is of utmost importance that they are an objective and impartial measure that can guide government’s procurement decisions. To test the VFM test, CCPA Saskatchewan wanted to know how often the VfM test recommends the P3 model. We identified 47 publicly-available VfM assessments from P3 projects in Saskatchewan, Alberta and British Columbia conducted over the past 15 years. Of these 47 VfM assessments, only one recommended against the P3 model in favour of a traditional public build. That is a 98 percent approval rate for P3s versus the public model. Is There Value in Value for Money Assessments? Testing the VfM Test in Western Canada demonstrates how the assumptions built into the VfM test as well as the interests of those who author them, combine to create an assessment method that, while not guaranteeing the selection of the P3 model, is nevertheless heavily weighted in its favour; an astounding 98 percent of the time in Western Canada.