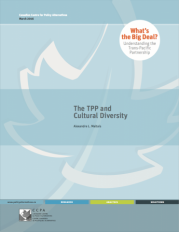 The TPP and Cultural Diversity

This study questions why Canada agreed to weaker protections for culture and cultural industries in the TPP than in other trade treaties, including the North American Free Trade Agreement (NAFTA) and pending Comprehensive Economic and Trade Agreement with the European Union. The study also finds that the TPP enshrines a neoliberal interpretation of culture that is at odds with Canadian and international standards for the promotion of cultural diversity. The diluted protections in the TPP threaten the integrity of Canada’s cultural policies in favour of foreign commercial interests, especially the U.S. entertainment industry.