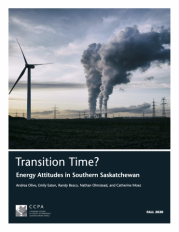 The report shows a Saskatchewan public in conflict with itself, with public opinion often caught between the need to address climate change and support for the oil and gas industry. While there is significant concern about climate change and support for renewable energy, many in the province continue to believe Canada can continue to produce and even expand fossil fuel production and still achieve its climate commitments. The authors note that this contradictory response actually closely mirrors the messaging of many prominent Canadian political and industry leaders, who refuse to concede that meaningful emissions reduction must include the substantial curtailment of oil and gas production. The authors conclude that “there is an urgent need for honest climate change leadership in the province, about the scale and the scope of both our emissions and the effort needed to do our part in mitigating global climate change.” While attitudes in Saskatchewan on energy are surely changing, it is yet to be seen whether the Saskatchewan public will reward or punish politicians who try to begin that ‘honest’ conversation with us.