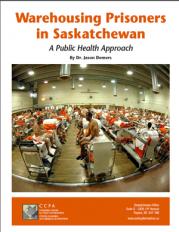 In the U.S., “warehouse prisons,” where activities, programming, and mobility have been deemphasized and prisoners are merely stored like objects to serve out their sentences, are increasingly becoming the norm. While we may think of prison warehousing as a uniquely American problem, it is increasingly emblematic of the Canadian experience as well. Warehousing Prisoners in Saskatchewan: A Public Health Approach, by Dr. Jason Demers, illustrates how Saskatchewan boasts one of the most highly strained provincial prison systems in the country. Saskatchewan prisons currently house “almost twice as many inmates as they were designed for.” To accommodate this crisis, classrooms, gymnasiums, workshops, and visiting rooms are being converted into dormitories, and most of the province’s cells are being double bunked - with triple-bunking a distinct possibility in the future. The effects of this overcrowding on the living conditions of the inmates in these institutions are alarming. Through a series of interviews with government officials, prison justice advocates, former inmates and their families, Dr. Demers documents a series of troubling findings due to overcrowding in SK prisons, and concludes the report with a summary of recommendations that could reverse the further deterioration of the provincial prison system.