Home › Publications › Reports & Studies › Where Are the Women? 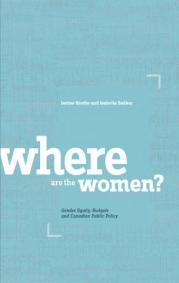 Where Are the Women?

Contemporary Canadian fiscal and social policy reforms have been accompanied by the progressive disappearance of the gendered subject, both in discourse and practice. Indeed, the minority Conservative government of Stephen Harper has gone so far as to declare that the goal of gender equity has been achieved in Canada. However, as Brodie and Bakker argue in Where Are the Women? Gender Equity, Budgets and Canadian Public Policy, not only has the goal of gender equality not been met but the relentless attack on federal social programs over the past decade has actually undermined gender equity, as well as the well-being of Canadian women, especially the most vulnerable.

In fact the degendering of public policy and the erasure of the goal of gender equity from the policy process has been a long-standing project, reaching all the way back to the mid-1990s. Brodie and Bakker describe how over this period there has developed a fundamental disconnect—a policy incoherence—within Canadian government. On the one hand, Canadian governments have been publicly committing themselves to working towards gender equality goals. On the other, these same governments have been subverting their own progress by giving priority to supposedly “gender-neutral” market-based policies at the expense of all other social priorities.

In Where Are the Women? Brodie and Bakker focus on five dimensions of the process of degendering of contemporary Canadian public policy. Chapter 2 examines major federal social policy initiatives since the mid-1990s, and their implications for different groups of women. Chapter 3 focuses on the fragmentation and erosion of Canada’s social assistance regime and considers the implications of these processes for gender equality. Chapter 4 documents the degendering of policy capacity, both within and outside of government, and how such changes stand in contrast to the international and national commitments made by a series of Canadian governments. Chapter 5 considers how budget planning in all its aspects has become an increasingly important component of social policy capacity, and how the veil of budget secrecy has been adopted as a mechanism to obscure the fiscalization of social policy. Finally, a series of recommendations related to the governance of fiscal and social policy are provided in Chapter 6, while Chapter 7 offers as a postscript a description of the significant changes to the position of gender equity in Canada following the election of the Harper Conservative government.