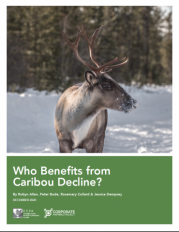 Who Benefits from Caribou Decline

This report looks at the promised economic benefits of coal mining projects in northeastern British Columbia and concludes that the jobs, tax revenues and production activity estimates are wildly overstated, while pledges to protect vulnerable wildlife species have not been met.

The woodland caribou—a distinct population called Central Mountain caribou located in the same region as the three coal mines this research examines—are listed under Canada’s endangered species legislation, the Species at Risk Act. While there are numerous provincial and federal legislative and regulatory instruments designed to protect them, the impacts of resource extraction, including coal mining, continue to threaten the species' existence.

In order to have resource projects approved, and to receive the necessary project permits, resource companies promise regulators they will mitigate the environmental impacts of their projects. They position those impacts as necessary trade-offs required in order to realize promised economic returns.

For this report, the researchers looked at publicly available financial information to measure the actual financial and economic impacts of the Willow Creek, Brule and Wolverine coal mines in N.E. BC over the last two decades to see if the promised benefits materialized. They found that the financial and economic benefits from coal mines in northeastern British Columbia were not realized at levels close to what was promised, while habitat destruction of this endangered species has continued. The report’s findings have implications for natural resource management across Canada.