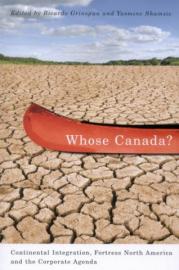 Questions and concerns regarding the scope and depth of Canada’s relationship with the United States loom larger than ever since 9/11. In Whose Canada?, contributors provide a comprehensive analysis of the legacy of free trade and examine the challenges that deepening bilateral integration – including its latest incarnation in the Security and Prosperity Partnership of North America (SPP) – presents for Canadian sovereignty and public policy autonomy.

The authors share their scepticism regarding corporate Canada’s continental agenda and Ottawa’s deepening linkages with Washington. In response to the question “Whose Canada?” they forcefully argue that Canada’s future must be shaped by the whole of its citizenry rather than a determined elite. To this end, they advance a practical vision for revitalizing democracy and upholding the public good.

“This book addresses the most pressing issue facing Canadians today - our nation's future in Fortress North America. In Whose Canada? you will find the views and concerns of the most engaged thinkers and activists in our country. The issues dealt with in this remarkable book, beautifully crafted, are the core questions of our era. For Canadians, in essence, what is at stake is the kind of society in which we live, the legacy we will leave for our children, and Canada's role within a troubled world.” Maude Barlow, author of Too Close For Comfort: Canada's Future Within Fortress North America.

Ricardo Grinspun is associate professor, economics, and fellow, Centre for Research on Latin America and the Caribbean (CERLAC), York University.