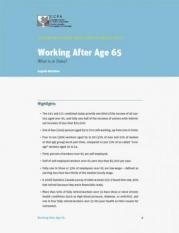 It is argued by some that eligibility for Old Age Security (OAS) and the Guaranteed Income Supplement (GIS) at age 65 discourages older Canadians from remaining in the workforce, and that we need to keep them working longer to avoid  present and future labour shortages and a sharp rise in the so-called “dependency” ratio (the ratio of retirees to the working-age population). Accordingly, the federal government proposes to phase-in an increase in the age of eligibility from age 65 to age 67, affecting Canadians who are now 54 and younger.

This paper looks at some of the realities of working past age 65, and examines what an increase in the OAS eligibility age will mean for those who will have no choice but to work longer in the future.