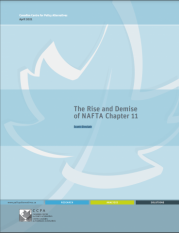 The Rise and Demise of NAFTA Chapter 11

The removal of investor–state dispute settlement (ISDS) from the renegotiated NAFTA was a critical victory for democratic sovereignty over investor power. Within three years, the Canada–U.S.–Mexico Agreement (CUSMA) will eliminate ISDS between Canada and the U.S. and significantly scale it back between the U.S. and Mexico.

Canada’s negative experience under NAFTA’s investment provisions (in Chapter 11) over the last quarter century supports the argument that ISDS has harmed the public interest. Without pressure from the Trump administration, however, it is highly doubtful that the Liberal government would have curtailed ISDS on its own. In fact, all indications are that the Canadian government remains committed to ISDS in other negotiating venues.

The abolition of ISDS has been demanded by NAFTA Chapter 11 critics and trade justice activists for over two decades. Its removal is cause for celebration. This move greatly reduces Canada’s vulnerability to ISDS lawsuits, nearly all of which have been initiated under NAFTA by U.S. investors. It is also an important step toward dismantling the ISDS regime globally. Yet it is only a partial victory.

CUSMA’s revamped investment chapter gave the old NAFTA Chapter 11 a three-year lease on life, during which much harm can still be done. ISDS also persists in an attenuated form between the U.S. and Mexico. Most significantly, Canada, the U.S. and Mexico continue to be enmeshed in an extensive web of bilateral and regional accords containing ISDS, including the misleadingly labelled Comprehensive and Progressive Agreement for Trans-Pacific Partnership (CPTPP).