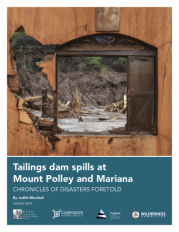 This paper explores the many parallels between the tailings dam spills at the Mount Polley mine in British Columbia (BC), Canada, and the Samarco mine in Mariana, Minas Gerais, Brazil.

The Mount Polley disaster took place in August 2014, when the dam holding toxic waste from the copper and gold mine collapsed, creating the largest environmental disaster in Canada’s mining history. In November of the following year, the largest mine disaster in Latin American history took place in Mariana, Brazil, when an even larger reservoir of waste collapsed at the Samarco iron mine. This paper finds numerous similarities in the circumstances leading up to and following the disasters, and argues they point to troubling systemic problems in the global mining industry.

—
This study is part of the Corporate Mapping Project, a research and public engagement initiative investigating the power of the fossil fuel industry in Western Canada. The CMP is jointly led by the University of Victoria, Canadian Centre for Policy Alternatives and the Parkland Institute.

The study is co-published by the Corporate Mapping Project, the Canadian Centre for Policy Alternatives – BC Office, PoEMAS (Grupo Política, Economia, Mineração, Ambiente e Sociedade) and the Wilderness Committee.