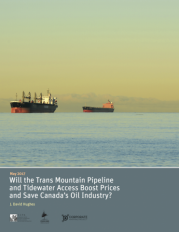 Will the Trans Mountain Pipeline and tidewater access boost prices and save Canada’s oil industry?

One of the primary rationales for Kinder Morgan’s Trans Mountain pipeline expansion project (TMEP) is to maximize the price for Alberta bitumen by getting oil from Alberta to “tidewater”. Tidewater refers to ocean access in order to ship oil to overseas markets via tankers. Industry and the federal and Alberta governments argue that a pipeline to tidewater will unlock new markets (Asia in the case of the TMEP) where Canadian oil can command a better price than in the US, where the majority of Canadian oil is currently exported.

This paper examines the tidewater argument and other problematic assumptions that led to the pipeline’s approval.

This study is part of the Corporate Mapping Project, a research and public engagement initiative investigating the power of the fossil fuel industry in Western Canada. The CMP is jointly led by the University of Victoria, Canadian Centre for Policy Alternatives and the Parkland Institute.

This research was supported by the Social Science and Humanities Research Council of Canada (SSHRC).