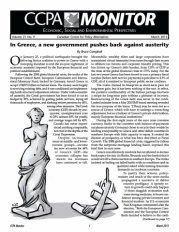 A note from the Editor:

The Monitor doesn’t normally have a theme but this month there are two: the electoral transition in Greece toward a more meaningful democracy, and the discouraging shift in the opposite direction—in the form of unnecessary, dangerous but politically useful anti-terrorism reforms—here in Canada.

We decided to feature the more positive of the two situations on our cover. Bruce Campbell analyzes the meaning of Syriza’s January 25 win, for Greeks as well as Europe’s austere social-democratic parties. In the same section, Asad Ismi considers the possibility of a Greek exit from the euro zone, and Greece’s new finance minister explains why he would prefer to avoid that option.

Like the Greek bailout negotiations, the debate over Canada’s new security legislation—bills C-51 and C-44 in particular—is moving quickly. Bill C-51 creates a new offence of promoting terrorism, defined far too broadly, and gives CSIS agents more policing powers at home—powers they have not had since the “bad old days” of Canadian spying, as Paul Weinberg reminds us in his feature about the RCMP’s disruption of progressive organizations like Praxis in the 1970s. There is a detailed legal primer on C-51 by Clayton Ruby and Nader R. Hasan on page 21.

In the same section, Joyce Nelson draws the links between these new security laws and a private member’s bill on protecting Canada’s critical infrastructure, including, possibly, from environmental protestors. An interview with Roch Tassé on page 14 touches on the evolution, across Liberal and Conservative governments since 2001, of the idea that Canada’s economic security is equivalent to its national security, enforceable through all the same tools used to combat what we now call terrorism.

The government hopes to move C-51 through Parliament as quickly as possible, warning any delay would allow the “great evil” of “violent jihadism” to spread, its only goal "the annihilation of anyone who dares to be different from them.” But there are many voices urging slow, thorough consideration of the legislation’s impacts on legal norms and civil rights. We hope these articles contribute to that discussion, which we will be following carefully as C-51 heads to committee in March.