Home › Publications › Commentary › Fast Facts: When will they ever learn? 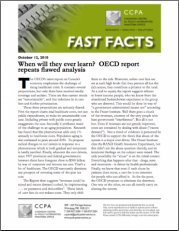 Fast Facts: When will they ever learn?

The OECD’s latest report on Canada’s economy emphasizes the challenge of rising healthcare costs. It contains several propositions, but only three have received media coverage and acclaim. These are that current trends are “unsustainable”, and that solutions lie in user fees and further privatization.

These three propositions are seriously flawed. First the report charts total healthcare costs, not just public expenditures, to make its unsustainable cost case. Including private with public costs greatly exaggerates the case. Secondly it attributes much of the challenge to an aging population.  Research has found that this phenomenon adds only 1% annually to healthcare costs. Population aging is also estimated to peak around 2030.  To propose radical changes to our system in response to a phenomenon which is both gradual and temporary is hardly justified. Finally, whatever the cost drivers, since 1997 provincial and federal governments between them have foregone close to $300 billion by way of corporate and income tax cuts. That’s a lot of healthcare. The OECD summarily dismisses any prospect of restoring some of the past tax cuts.

The Report then suggests “revenues could be raised and excess demand curbed, by implementing ….. co-payments and deductibles”.  These kinds of user fees do not reduce costs. They only shift them to the sick. Moreover, unless user fees are set at such high levels that they prevent all but the rich access, they contribute a pittance to the total.  As a nod to equity, the report suggests rebates to lower income people, who we know from the abandoned Saskatchewan experience is the group who are deterred. This would be done by way of “a government administered means test” according to the Fraser Institute. Well there goes a chunk of the revenues, courtesy of the very people who hate government “interference”. But all is not lost. Even if revenues are not greatly improved, costs are contained by dealing with abuse (“excess demand”).  Not a shred of evidence is presented by the OECD to support the thesis that abuse of the system is a major cost driver. The Fraser Institute cites the RAND Health Insurance Experiment, but this didn’t ask the abuse question directly, and its incidental findings on the subject were mixed. The only possibility for “abuse” is on the initial contact. Everything that happens after that - drugs, tests and treatments - is driven by health professionals. Finally, we know that even if such abuse by patients does occur, a user fee is no deterrent for people who can afford it.  As for the poor, the OECD proposes to eliminate the deterrent. One way or the other, we can all merrily carry on abusing the system.

Even if the aging and abuse arguments were true, their impact would pale compared to other factors underlying demand pressures on the system, such as new technologies, rising poverty and inequalities and an unhealthy physical environment. Even the Report itself suggests that Canada should pay more attention to the determinants of population health. It also concedes that the health outcomes gap between rich and poor may have something to do with “an inadequate social safety net”.

The Report’s second solution to permit a greater role for private insurance and allow for doctors to practice both sides of the public/private fence is treated with little discussion and nothing in the way of evidence to support it as a solution to rising costs. In relation to the first, health economist Bob Evans has painstakingly documented that a pluralist, competitive market model is far more expensive than the unitary, single pay system. Once again, the Report contradicts itself by recommending that Canada adopt national pharmacare and home care programs precisely because these are currently pluralist and fragmented in their financing and delivery. The OECD might be pleased to know that a national CCPA study released on the same day argues that, depending on the particulars, a national pharmacare program could achieve annual cost savings of between $2.5 and $10 bn. In other words, one way to contain costs is to build on the foundation of public delivery and financing that we already have. Finally, the Report omits the fact that costs of the core of our public system have not risen as a percent of GDP in the last 35 years. It is the cost of services outside of hospital and physician services covered by the Canada Health Act which have been the cost drivers, especially drugs.  Many of these are financed and/or delivered privately.

Allowing doctors to practice on both sides of the fence is a variation on user fees in that patients buy preferred treatment (e.g. shorter wait times). Once again, this doesn’t cut total healthcare costs. It raises them. It may shift some costs from the public purse to the private purse, although in the UK where private and public systems are parallel, taxpayer savings are not evident. It is however inequitable, because it erodes the ability of the public system to serve those still dependent on it. This is largely because to the extent that finite physical and human resources are diverted to the private system, they are not available in the public system.

Given all of the above, arguing for increased privatization as a cost cutting measure is disingenuous. An honest statement would be that increasing the private share of financing and delivery will increase healthcare costs, but some portion of that increase is shifted from the public purse to the individual’s pocket. Couched in these terms, the argument is exposed as a moral (or immoral?) argument about who should pay, not an economic one about reducing costs.

In short, the Report’s solutions match neither its misdiagnosis as to the etiology of the healthcare cost crunch, nor a more accurate diagnosis - foregone tax revenues, the shift to chronic care from acute care, new technologies and failure to attend to the determinants of population health.  Of additional interest is the fact that the Canadian government had “extensive input” into the report. Perhaps we now know its position – make the sick pay.

Pete Hudson is a Senior Scholar in the Faculty of Social Work - University of Manitoba and a CCPA Mb. research associate.